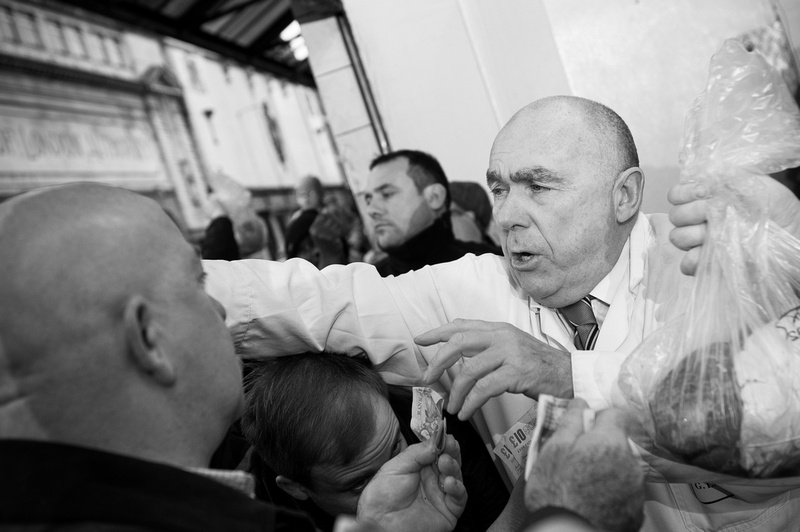 The Smithfield Market Christmas Eve meat auction is an institution.  It used to be that most of the market butchers would take at least a week away from the market at Christmas and not return to their stalls until the new year.  They would auction off their remaining stock on Christmas Eve to a few brave punters who would turn out in the cold to bid on the meat.

These days, most of the market traders are back at work again a few days after Christmas, supplying hotels and the catering trade.  But the meat auction still survives because of one man who is determined to keep the tradition going.  Greg Lawrence is the chairman of the Smithfield Market Traders Association and the proprietor of G. Lawrence Wholesale Meat Co. Ltd.  Every year, he makes sure that all the surplus meat from his fellow traders is rounded up and along with his sons, he opens up the shopfront at Harts of Smithfield, looking out onto Charterhouse Street.

The crowds queue from dawn to get a good position at the front of the shop.  It's a convivial atmosphere and everyone's in a lighthearted, festive mood.  There are some regulars who have been going along for decades and they know to wear something warm and waterproof because if the rain doesn't get you, a side of beef probably will and scrubbing blood out of your clothes isn't a good start to Christmas.  At the appointed hour, Greg and his lads open up the shutters and the auction begins.

For the most part, it's not really an auction in the real sense of the word.  Greg will announce the price of a lot and the punters hold their money in the air, hoping to attract his attention.  If it's your turn, he'll grab your wrist, take your money and not let go of you until one of his runners have handed him the piece of meat in question and he's made sure you've got it.  It's a good system and nobody ever loses out.

He's a real showman and clearly enjoys being the centre of attention for the couple of hours that it takes to empty out the shop.  Sometimes, he'll spice it up a bit by doing double or quits on the toss of a coin.  “Twenty quid for this big old bit of steak” he'll shout, “If you win the toss, it's yours for nothing.”

It's a hell of a deal because that bit of steak is almost always worth at least double that anyway.  You really can't lose out and the crowd know it, so they go wild.  Greg likes to pull this trick with the old ladies and people who look like they could use a bit of a Christmas present.  Everyone goes home happy, that's his thing.

Sometimes, a special lot comes up and he really will run an auction.  There's usually a suckling pig or two at the end of the morning and that tends to go for a good price.  When he can't grab a punter's arm and take their money, the crowd pass it forward for the winner.  More often than not, the lot ends up going out to its new owner the same way – it's not often that you see a crowdsurfing pig carcass in the City of London these days.

I shot this work with the kind permission of Greg Lawrence and his crew, who invited me into their shopfront for the 2012 Christmas auction.  I'd never had to wash blood off my cameras before...